Bill of Lading for Hazardous Materials

When a company ships a product, particularly a hazardous material, it needs to know that the company that ordered it has received it. It also needs to ensure the product makes its way safely to the recipient. Shippers, carriers and retailers rely on Bills of Lading (BOLs) to ensure a product is shipped safely and securely and that it arrives at its destination in one piece.

An accurate and automated Bill of Lading is critical for companies that transport hazardous materials. The software make sure you meet all of the requirements necessary to correctly complete this important document.

Finale Inventory is a top inventory management solution that will walk you through compliance and management of your BOL. 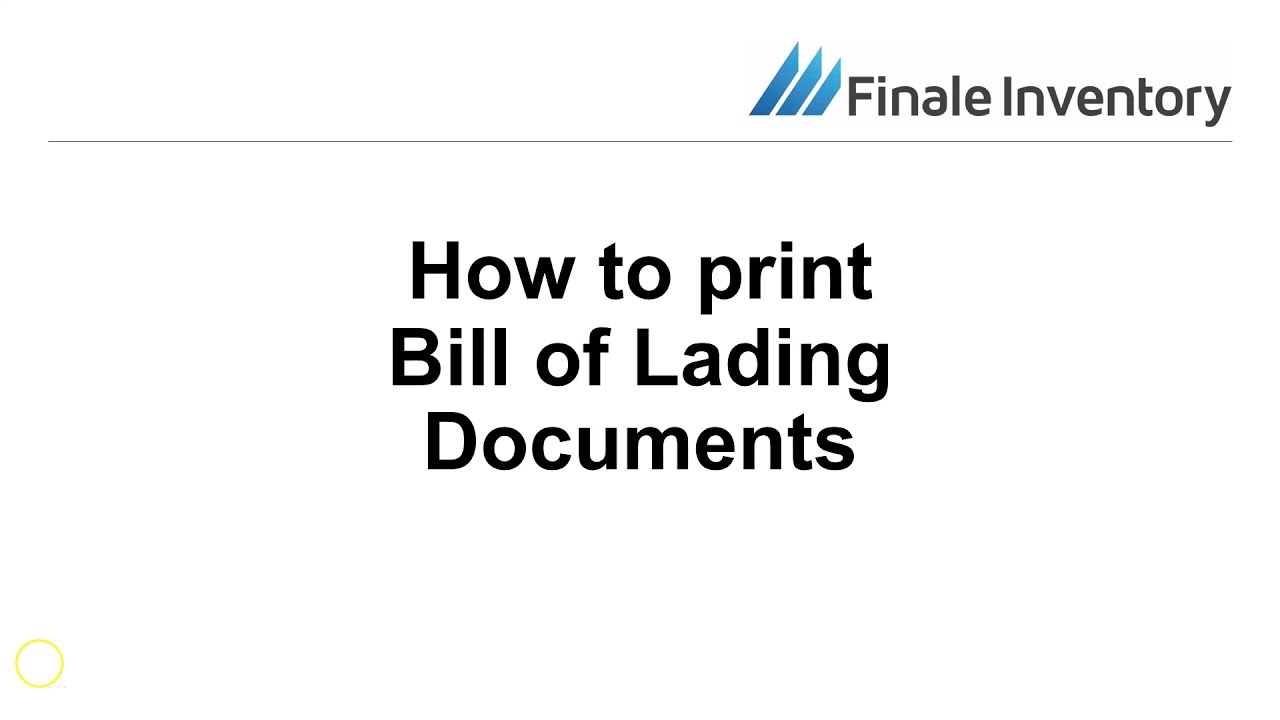 Hello, it's Mike Kroeger here, Finale Inventory. We are going to show you, in this video, how to print bill of lading documents. Let's get started. So you might be familiar with the term bill of lading. It really refers to documents for your shipping. So you've got to get to the shipping section of an order to print a bill of lading. So let's go to our sales. I'm going to find a particular sale. So many different types of bill of ladings can be produced from Finale. We have two basic types that are kind of pre-configured for you.

One that we call a straight bill of lading, which is just the content of the shipment. And then we also can do a hazmat-based shipment for say like fireworks customers. Let's start with the first one, just a straight bill of lading. So I'm going to pull up an order. When I get to the order, the bill of lading is done from the shipment, not from the order. So we need to go to the Shipment tab. Once we go to the Shipment tab, we can choose a shipment or one or the other.

What this bill of lading looks like, a lot of these areas can be customized. Contact your customer service representative for help. You can also just choose to go with the form right out of the box. So, many of the areas that the bill of lading is pulling from are in these areas here. You also might want to know where you can set your carrier that you can choose from. That is done here in Application settings. So in Application settings, you would go to Selling and under Selling, you can see that you can look at the shipment or shipping options and you can get your carrier information in here. That's where you're going to find those pieces of information.

So if I turn that on and I go back to my sales screens, you'll be able to see I've got an example of a sale that's got fireworks on it. Fireworks have a particular hazmat class and they also carry EX numbers and net explosive contents. These are required for any type of documents that you may produce for when shipping. So here we'll just use standard information. I'll pull up a carrier information just to show you that you can modify this information. You would still come here.

So if I say print the bill of lading, you're going to see a little bit different look bill of lading. So it's red, and this has got the UN class fireworks, the EX numbers, and the explosive mass, and the total gross weight. All of this is very, very controlled by the USDOT. So it's not a lot of customization other than the content of the information that you can do with a hazmat bill of lading. Besides these two different types of bills of ladings, it is always possible for you to use Finale's document engine and you can produce your own bill of lading.

So just as you see that we have the template that we've given you, you could always customize and create your own from the shipment or order information as you like. And that's our video on how to print bills of lading.

What Is the Hazmat Bill of Lading?

A Bill of Lading serves as a contract between the shipper and the recipient. It details what is in the shipment, where the shipment originated and where it is going, plus the shipping cost. The Bill of Lading is a legally binding document that gives the carrier and driver all the information they require to process the freight delivery.

Why a Bill of Lading Is Important for Warehouse Inventory Management

Finale Inventory integrated the BOL into our system because it plays a crucial role in administrative tasks for managing inventory. A BOL plays three key roles that make it important for inventory management:

Why Print a Bill of Lading?

Although electronic Bills of Lading are available and have their benefits, such as allowing a shipper and recipient to track shipments in real-time, there are also benefits to printing a BOL. With a printed BOL, a carrier can access the documentation anywhere, even if there isn’t an internet connection. A printed document is also more difficult to alter, meaning there’s less chance of product theft in a shipment.